We will remember our immigrant roots and celebrate 120 years of protecting families during our annual Flag Day celebration. The celebration takes place on Sunday, June 13, 2021, the eve of Flag Day, at the company’s headquarters at 1635 Northeast Loop 410 in San Antonio. During the celebration, we will unveil the Papal commissioned “Angels Unawares” sculpture. 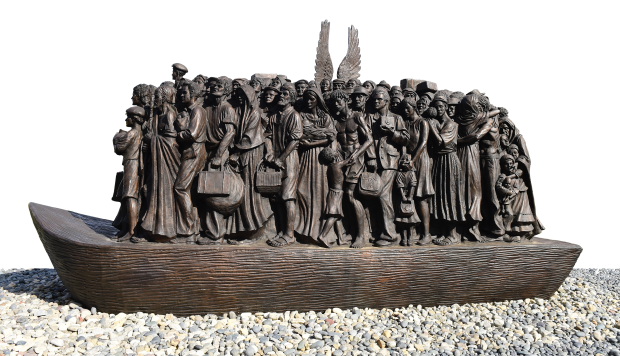 German immigrant founders. The statue depicts a group of migrants on a boat wearing clothes that show they originate from diverse cultures and historical moments.

The public is invited to attend this free event.

Pope Francis commissioned Canadian sculptor Timothy Schmalz to create and install the original bronze in St. Peter’s Square in the Vatican in 2019. It was the first time in 400 years that a new sculpture has adorned St Peter’s Square.

The sculpture derives its name from the New Testament’s Hebrews 13:2: “Do not neglect to show hospitality to strangers, for thereby some have entertained angels unawares.”

The 20-foot-long, 12-foot-high, 3.8-ton replica is currently touring eight U.S. cities before being installed on the Catholic University of America campus in Washington, D.C. It will arrive at the Catholic Life Insurance headquarters on June 9 and be lifted into place by an 80-ton crane. San Antonio is the only Texas city to host the statue.

“We are delighted that Catholic Life Insurance is hosting “Angels Unawares” on its U.S. tour, said Archbishop Gustavo Garcia-Siller. “They are providing us a wonderful opportunity by showcasing the statue here in San Antonio. This beautiful sculpture highlights immigration over spans of history, but it’s just not a story of the past, it is also what’s happening currently. People continue to search for freedom and better lives for themselves and their families. San Antonio was built by people from different backgrounds and those fleeing violence and persecution for freedom and peace. We have been blessed because we have heeded Christ’s call to welcome the stranger. Our faith reminds us that we are one human family.”

Company officials will unveil the sculpture during its 28th annual Flag Day celebration. The event will begin with a Catholic Mass on Sunday, June 13, at 5:30 p.m. The unveiling and Flag raising ceremony will follow the Mass. June 13 is an important date in San Antonio’s history as it honors the city’s founding in 1718 by Canary Islanders. The sculpture will remain in San Antonio for approximately six weeks.

“Catholic Life was founded 120 years ago by German Catholic immigrants who wanted to protect their families from life’s hardships,” said President J. Michael Belz. “However, big insurance companies did not want to insure immigrant families, so our founders formed their own company – one of the few at that time that provided coverage to both men and women.”

Since then, Catholic Life has successfully survived two World Wars, the Great Depression, numerous recessions, and more recently, a pandemic. Through it all, the mission has been to help families secure their future with solid financial products.